Keep the Loco in Darlo 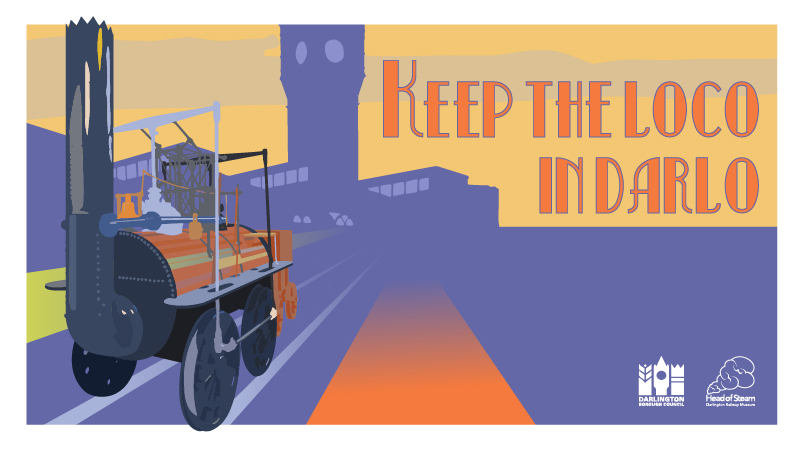 Built by pioneering railway engineers George and Robert Stephenson, Locomotion No. 1 was the first steam locomotive to haul a passenger-carrying train on a public railway, making its inaugural journey in 1825 between Stockton and Darlington.

For more than 160 years, the locomotive has been looked after by the people of Darlington, and since 1975, it has been on permanent display at the Head of Steam, Darlington’s railway museum.

With the 200th anniversary of the world-famous Stockton and Darlington Railway approaching in 2025, and ambitious plans for a new rail heritage quarter in Darlington including a redeveloped free-to-visit museum, the loss of Locomotion No. 1 would be a major blow to the town.

Darlington Borough Council, with support from rail heritage experts and a cross-party group of politicians, has launched a campaign to Keep the Loco in Darlo.

Councillor Heather Scott, Leader of Darlington Borough Council, says: "This is something the people of Darlington will be horrified about, and I fully understand.

“I want to send a very clear message to people in Darlington that this council will leave no stone unturned in our quest to keep Locomotion No. 1 in Darlington.

“Keeping Locomotion No. 1 in Darlington is crucial for our 2025 celebrations – it’s unthinkable to imagine it anywhere else but Darlington for the 200th anniversary of the world’s first passenger railway.

“I would urge people to sign the petition and add their voices to our campaign – the case for keeping Locomotion No. 1 in Darlington is not just persuasive, it’s compelling.”

Please sign our petition and help Keep the Loco in Darlo. If you have previously signed the 'Save Our Loco' petition before it was hosted on Change.org, you must do so again to ensure your signature is counted

Chris Lloyd, a journalist who specialises in history, discusses the rich background of the Locomotion No. 1 and why it's so important for Darlington's Railway Heritage.