What we do about unauthorised encampments

Code of conduct for caravan occupiers

Gypsies and Travellers have been a part of British life for many centuries.

They make up a small minority of the UK population.

Gypsies and Irish Travellers are listed as ethnic minorities under the Human Rights Act.

Public services, including councils and the police, have a duty to prevent unlawful discrimination against the community. They must also encourage equality of opportunity and good race relations.

There is an established Traveller population settled in Darlington.

Authorised sites for Travellers in Darlington

The council provides three caravan sites for Gypsies and Travellers. There are also 11 small private sites.

Rowan West (formerly Neasham Road) caravan site, Levisham Lane, DL2 1QZ. Established in the 1970s. The site was refurbished in 2016 to create a 22  pitch caravan site with £1,870,000 funding from the Homes and Community Agency.

Honeypot Lane caravan site, Elmtree Street, DL3 0YH. Established in the 1970s and leased to a family from the local Romany community. There are 32 residential pitches. There are also 24 transit pitches for travellers who can stay for up to eight weeks. All pitches are hard standing and can fit two caravans. There is also space for tow vehicles to allow families to be together.

There are two communal toilet blocks for residents on the transit pitches. Each block includes showers and a separate accessible shower/toilet room. There is also a laundry room with washing machines and tumble driers. 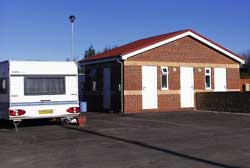