Looking Forward to 2021 at Darlington Hippodrome 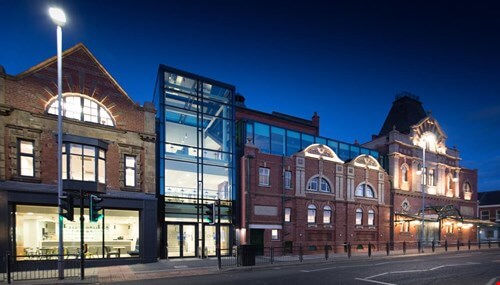 Following the festive family pantomime, Cinderella, which runs up to Sunday 3 January, the year kicks off with a bang as Steve Steinman brings his fuel-injected stage show Anything For Love to Darlington celebrating the music of Meatloaf (Mon 18 January). The show will feature Lorraine Crosby, the original vocalist on the hit duet ‘I ‘d Do Anything for Love (But I Won’t Do That)’.

The Birmingham Stage Company, the company behind Billionaire Boy and Awful Auntie, returns to Darlington between Thu 25 and Sun 28 February with a four day run of their stage adaptation of the David Walliams children’s classic Gangsta Granny.

Strictly Come Dancing favourite Giovanni Pernice will set the Hippodrome stage alight with his brand new show This Is Me (Mon 15 March). Giovanni will be joined by his cast of professional dancers and there is an opportunity to book a VIP pre-show meet and greet on the night! If you prefer your entertainment to be a little more sedate but no less entertaining then enjoy The Good Old Days of Variety (Tue 16 March) as headline guests The Dreamers are joined by comedy legend Duggie Brown and Victoria Jones with her amazing tribute to Cilla Black.

Featuring a star-studded cast from stage and screen, By The Waters of Liverpool is a new stage adaptation of Helen Forrester’s million-selling book. Sian Reeves and Mark Moraghan head the cast in this passionate and emotional story of life and love during World War Two.

April and May bring a selection of  shows for one night only including tribute to Tina Turner What’s Love Got To Do With It (Tue 6 April), One Night at the VE Day Proms (Tue 4 May) and an evening with Sir Ranulph Fiennes (Wednesday 5 May) talking about his life from schoolboy to the world’s greatest living explorer. Kate Rusby brings her exquisite folk vocals to Darlington (Thu 6 May) alongside her four piece band and the Vortice Dance Company from Portugal present their contemporary take on the classic horror novel Dracula (Mon 17 May). Music lovers have a treat in store with Walk Right Back – the story of the Everly Brothers (Tue 18 May), The Magic of Motown (Thu 20 May), Jools Holland and his Rhythm and Blues Orchestra (Fri 21 May) and Seven Drunken Nights celebrating the music of The Dubliners (Sat 22 May).

Families will love The Tiger Who Came To Tea (Thu 3 to Sat 5 June). This stage adaptation of Judith Kerr’s enchanting story comes direct form the West End and celebrates ten years on stage. For a night of comedy there’s none finer than Jason Manford who brings his one man show, Like Me, to Darlington (Sat 31 July) as part of his UK tour. Lovers of musical theatre will be spoilt for choice as Jonathan Andell and Jai McDowall bring their show Les Musicals to the Hippodrome with songs from the likes of Wicked, Miss Saigon, Chess and of course Les Misérables.

Looking further ahead, we welcome 2022 with the fab-u-luss musical Strictly Ballroom (Mon 3 to Sat 8 January 2022) based on the award-winning film, directed by Craig Revel Horwood and starring Kevin Clifton.

Tickets are already on-sale for the 2021 season; book early to secure the best seats by calling the box office on 01325 405405 or visiting www.darlingtonhippodrome.co.uk -  and make sure to sign up to our mailing list or follow us on social media to be the first to hear about what else is in store for 2021.