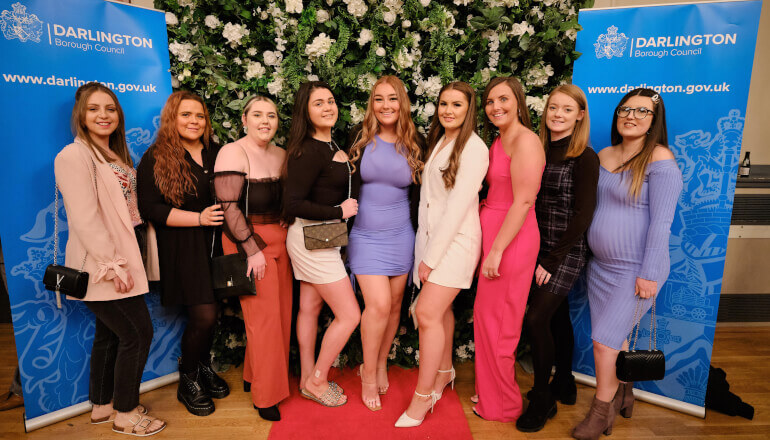 THE stars at the heart of Darlington’s community were given chance to shine at an awards ceremony.

The heart-warming annual ceremony saw hundreds gather to celebrate the achievements of people working to make Darlington a better place.

Finalists in 17 categories mingled with dignitaries and those who nominated them at the event, staged at The Dolphin Centre on Friday, November 12.

Seth Pearson, director of Darlington Partnerships at the council, said: “There is so much to celebrate in Darlington and these awards brought together all those who enrich the local community. There are people out there making a difference in all kinds of spheres and who might otherwise go unrecognised and this was all about putting the stars of Darlington on a pedestal. It was a fantastic night.”

This year there were three new categories – the ‘Above and Beyond Award’ won by Simon and Rachel Leadbetter of Mowden Pub, ‘Contribution to Education’ presented to Red Hall Primary School and ‘Covid Hero’ won by Craig Shields of Craig Shields’ Fruit and Veg. In addition, a Special Stronger Communities Award was presented by the deputy leader of the council, Councillor Jonathan Dulston, to a nominee he felt deserved particular recognition: Sarah Rose, who has stepped up to support the residents of Skerne Park.

Cllr Dulston said: “We have seen great resilience and determination in communities across the town in the past year. Many people have gone the extra mile to help others since the pandemic began, and our awards are a great way to pay tribute to them and to celebrate all the good work being done throughout Darlington. Every day, I meet with people and organisations who go above and beyond to support our town and I continue to be inspired by the stories I hear. It makes me immensely proud to live in our fantastic town.”

Darlington resident John Appleton, 95, won the ‘Citizen of the Year’ award. Throughout his life, John has been a volunteer hospital visitor for 40 years, and is the last remaining founding member of the Darlington Sports Council, organising five-a-side, badminton and other sports tournaments throughout the town, as well as being a youth leader throughout all youth clubs in Darlington, involved in the Princes Trust and many other charity events. His nomination read: “He has given everything to the community in Darlington without asking for any recognition and has touched the life of thousands of local people and families.”

Magician and entertainer Tim Litchfield compered the evening and entertainment was provided by The Voices of Darlington and Rachel Coad School of Dance. Boxing champion Troy Williamson made an appearance to congratulate winners on the night.