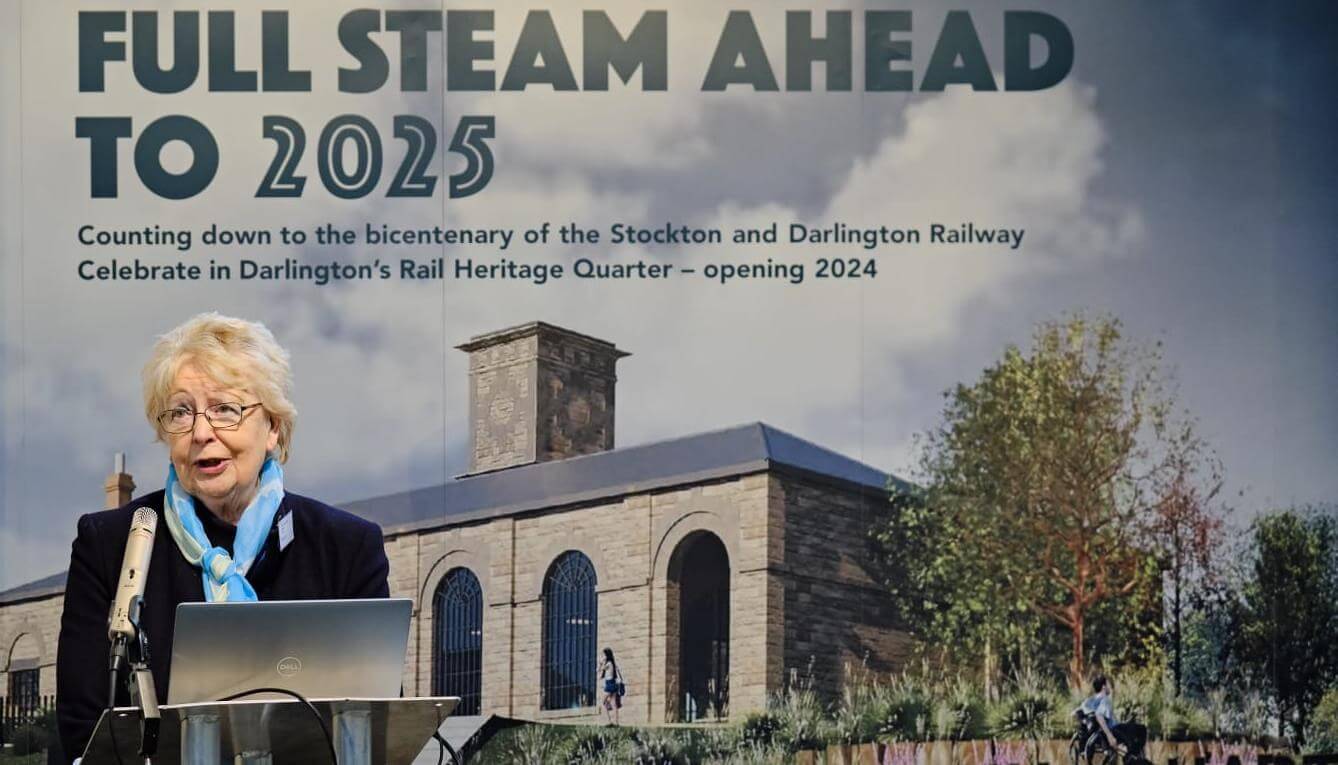 Councillor Heather Scott, leader of Darlington Borough Council, had the honour of breaking the ground to mark the start of construction of Darlington’s Railway Heritage Quarter.

This is a major project that will invest in the town’s rail heritage ahead of the bicentennial anniversary in 2025 to create a national visitor destination in Darlington. Heritage and cultural regeneration are now recognised as a key ingredient in economic growth and the Railway Heritage Quarter will complement the economic growth ambition of the Borough.

Essential improvements will be carried out on several significantly historic buildings on the site, linking them together to create a cluster of attractions including the Skerne Bridge, the oldest working railway bridge in the world.

Digital and technological investment will bring history to life and plans include a new immersive ride experience the likes of which are only seen at theme parks. The Railway Heritage Quarter will have a café and shop, themed play area, show field, a new live engineering building, temporary exhibition space, archive and extended car parking, which will attract all generations to visit for years to come.

The project is being supported by £20million of funding from the Tees Valley Mayor and Combined Authority.

Councillor Scott said: "This is an absolutely momentous day for us here in Darlington, it's a once in a lifetime opportunity for us to re-launch Darlington as the birthplace of the railways, the town that financially supported the initial idea of the passenger railway. It has taken a great deal of time, passion, energy and ingenuity to reach this stage of the project and it is with a great deal of pride that I cut the first turf and set the Railway Heritage Quarter on track for completion in time for the bi-centenary celebrations of the Stockton and Darlington Railway in 2025."

Tees Valley Mayor Ben Houchen said: “It is fantastic to hear that we’ve got spades in the ground and can officially launch the start of building works on the Darlington Railway Heritage Quarter. This top-quality scheme will include attractions never seen before in our region. It’s yet another project we’re kick-starting in 2022, our year of construction. This is a bit different to the other schemes we’re driving forward this year, from transforming transport to redeveloping Teesworks. It’s no less important, though, and that’s why we committed £20million to make it a reality.

“This ambitious attraction will tell the story of how we helped shape the world through our rail heritage and innovation for generations to come, supporting the 200th anniversary celebrations of the Stockton and Darlington Railway. What’s more, it’ll do so while boosting tourism to support our brilliant local businesses, putting more money in people’s pockets.”

Councillor Andy Keir, cabinet member for local services, added: “I am delighted to see construction begin on what is an ambitious and exciting project for the town, the borough and the whole of the Tees Valley.

“Alongside celebrating our fantastic and unique place in the history of rail travel, the Railway Heritage Quarter will breathe fresh life into an area that was once at the forefront of world rail engineering.”

Niall Hammond, Chair of The Friends of the Stockton & Darlington Railway, said: “This is a landmark moment recognising the considerable work and efforts of all those working towards 2025. In the S&DR and our railways, we’ve inherited an internationally important legacy from the past, one on which to build a better future for our economic prosperity, the education and inspiration of our children, and the community pride in a better built environment in which to live, work and play.”