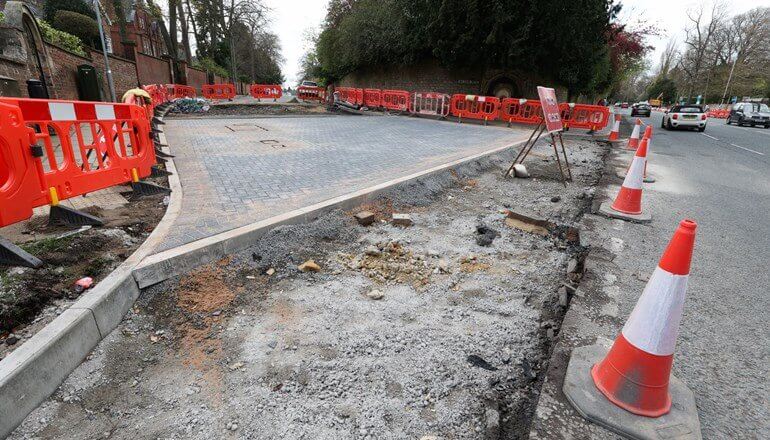 Work to create new walking and cycling routes on one of Darlington’s busiest commuter routes is on schedule, with the scheme due to be complete this summer.

The work to Woodland Road is the first phase of a £1.7m scheme funded by the Tees Valley Mayor and the Tees Valley Combined Authority to create a safe route for pedestrians and cyclists from West Park to the town centre.

The scheme began in November and was programmed to take 10 months.

Construction of new footpaths along the routes has been completed in short sections, to ensure two-way traffic can run as freely as possible at all times of day.

Ten of the pavement sections are now complete, with five more to do. After works to the footpaths are done, the construction of raised cycle lanes will begin, which is expected to be finished by the end of May.

After that traffic islands and pedestrian crossings will be installed, followed by the full resurfacing of the carriageway. This will require full overnight road closures which will be shared with nearby residents and the public well in advance.

Councillor Andy Keir, cabinet member for local services, said: “We appreciate the patience pedestrians, cyclists and drivers have shown during the works on Woodland Road and ask for it to continue for a little longer while the scheme is completed.

“Keeping the traffic flowing on Woodland Road has been a priority throughout the works as it’s a main route for commuters coming into town from County Durham and the A1, as well as the west side of town, and although this does mean the work will take longer, it results in much less disruption overall.

“Once complete, the benefits for pedestrians and cyclists will be clear – we’re committed to helping people use alternative forms of transport to reach the town centre.”

Further information on the walking and cycling route, including proposals for phase 2 of the scheme, can be found at www.darlington.gov.uk/transport-and-streets/woodland-road/